Due to my vacation and a last work week of organizing just that I am terribly late with this, but we had a very successful and productive workshop on Aachen Horror a month ago. Carsten already posted about it in his blog (in German), much earlier than me. 🙂

Several of my colleagues and students followed my invitation to take part in a day-long course to gather input and feedback for the Aachen Horror project. The night before (literally night… 🙂 ) Carsten had arrived, so this was also a chance for him to finally meet the chair (at least a few of us) and get a feeling who it is he’s working for. 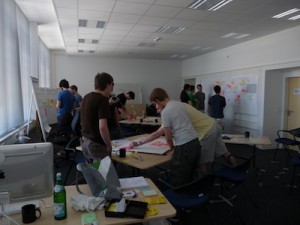 That’s how the room looked with everybody being busy and productive. (Photo by Carsten Schmitt)

I won’t go into detail on the modus operandi of the day, it’s probably sufficient to say that after a short introduction by me, Carsten gave a great overview on the planned story elements so far. That way everybody had a common ground and we were able to work in small groups as well as individually to brainstorm ideas and formulate various concepts.

It was exciting for me to see people with various background in terms of roleplaying experience or gaming habits work on my project. Even without Carsten or me mentioning some of the ideas we had had way before (btw, Carsten participated actively while I was merely moderating) some people came up with surprisingly similar ideas. That was very reassuring to say the least. 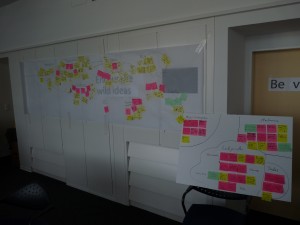 Two of the group results from the morning session. (Photo by Carsten Schmitt)

During the morning three groups sketched out various ideas and collected them on large whiteboards (or whiteboard-mockups :)) to present them in front of the whole workshop. The afternoon session then focused on two concrete ideas out of these concepts, one about a more technical concept and the other about a plot related issue. For the danger of spoilers I won’t give away what these were, but I think both results are promising.

I want to again thank everybody involved for their valuable input, especially Carsten who took the long way here in spite of his daytime job and a broken car holding him up until late at night and my colleague Chat who introduced me to the workshop format in one of his own projects (even though I modified it a little, the concept worked wonders for me!).

After catching up some sleep we went for drinks in the evening, which was a great chance to talk about gaming in general (I’ve never talked to a real roleplaying game author before, hehe).

On the next day I have Carsten a tour of the city to look for potential locations that we can use in the game. To be honest I was a little afraid about that, because I have virtually no history knowledge whatsoever and even my “general” knowledge about Aachen is thin. I know how to get around, but better not ask me how a certain quarter is called or what distinctive building is in what region. For me, getting from A to B is a row of movements and changes of direction at certain, numerically defined points. As in “Go and follow the street until the third intersection, then turn left”. I suck with stuff like “Go until you see that really old yellow brick house and then walk towards the city centre”, I really do…

I was lucky, though. Carsten drive me around and we stuck to the areas I knew well (that is more or less a large circle around the city centre where I live :p). I think this is reasonable, though, because we can’t demand our players to move in a too huge area or several disconnected quarters of the city (and in terms of square kilometers, it’s still big, mind you, I am not that bad!).

As he wrote in his blog, two of the best parts were finding one of the coolest places to live ever and visiting the granus tower. The latter was nothing new for me, of course (I’ve entered it several times already during my work on a project for the chair), but it was the first time I could pretend to be a guide myself. :p

Sunday was closing the weekend for us with some more city-viewing (the weather was a lot nicer), but we didn’t have another coincidence finding like on Saturday. Of course that doesn’t mean it was less productive.

All in all, I think the weekend was very productive and useful for the project and I had a great time with Carsten being around. I’m really happy we share a lot of views on gaming, not just because it’s beneficial for the project, but, well, it’s just nice in general to find a like-minded person. I really hope we will be able to do something like this in the future again (maybe even with my boss).